The Titanic, a ship that needs no explanation, struck an iceberg at 10:25 PM on April 14, 1912.  It sent out a CQD message via the Marconi wireless at that time.  Why a CQD?  Because in 1904, the Marconi company suggested the use of “CQD” for a distress signal & established it on February 1 of that year when Marconi Company issued Circular No. 57.  A strict interpretation would be “All stations, Distress.”

There were U.S. Senate hearings following the Titanic disaster, everyone eager to learn from this debacle.

“Is CQD in itself composed of the first letter of three words, or merely a code, ”  Senator William Smith asked Mr. Harold Bride, the surviving wireless operator.

Mr. Guglielmo Marconi himself then testified about the code stating  “[CQD] is a conventional signal introduced originally by my company to express a state of danger or peril of the ship that sends it.”

The now prevalent, SOS — Save our Ship — came about the Titanic as the US Senatorial Committee found Marconi guilty for delay. 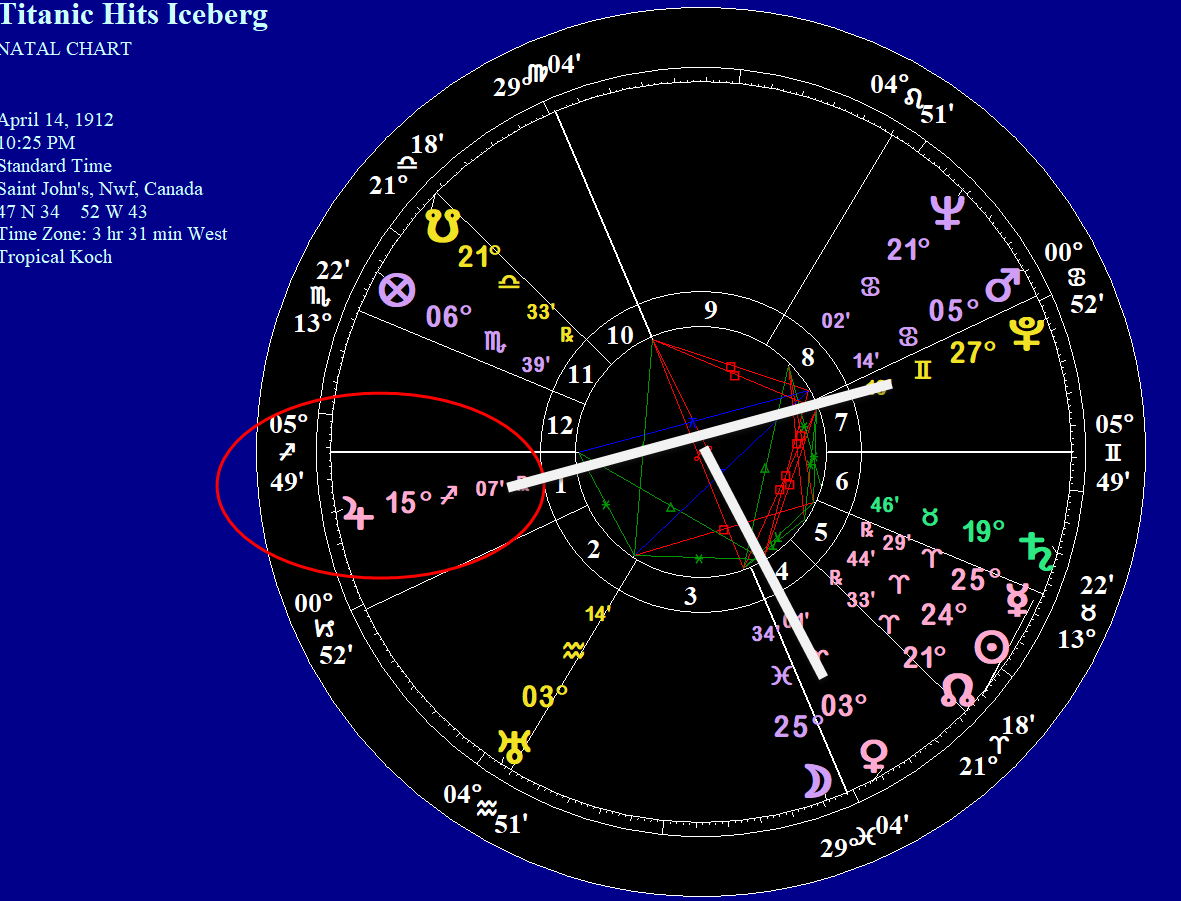 As our featured image states, the Titanic issued a CQD at 10:25 on April 14th about 300 miles off the coast of Newfoundland; we are using Saint John’s for the location, though of course, that is technically wrong.   But it does give us the Ascendant of 06 Sagittarius, A Game of Cricket, that Dr. Jones writes is about man’s insatiable desire to refine and strengthen every last potentiality and his need to gain understanding.

As an Ascendant 05.49 Sagittarius “A Game of Cricket” may seem wildly amiss for this particularly moment in time, but stopping to ponder the symbol for a bit, that may be more apropos than first realized.  Firstly, Sagittarius as a sign needs to understand the whole picture before acting, if it is playing the Cricket, the players may like being interrupted to deal with what they consider nonessentials.

So it seems to us viewing the chart and checking the relevant historical data.  Some naval historians have felt that the first CQD call made at 10:26 was late in the game, because of these comments from Bride far earlier.

At 7.30pm a fourth Iceberg  message was received.  Bride said he delivered it to the bridge. This message was from the Leyland liner Californian (call sign MWL) to the Antillian (MJL; Captain Japha) of the same line. It read:

Bride does not remember to what officer he delivered this message. A final ice warning was received at 9.40pm from the Mesaba of the Atlantic Transport Line (call sign MMV, Captain Clark):

Who knows what happened.  The Moon had been in the 3rd Quarter on April 9th; the new Moon was not to rise for another five days, so at 10 pm the sky was dark and Captain Smith apparently could not see what they hit,.  Perhaps he postponed issuing a call while he tended to his ship.  Maybe he thought while they may have hit an Iceberg, that it knocked about and cause some engine problem or just disbelieved that anything to could happen to her.

We think that the last possibility is what doomed the ship as the messages came in around the dinner hour & the Captain was holding sway at the “Captains Table,” socializing.  We say this  because Chiron at 9.33 in the Third House with intercepted Pisces is square the Part of Fortune at 12.36 Scorpio in the Eleventh House — that’s a lot of networking and kibbitzing.  We also think that perhaps this was his typical behaviour at the dinner hour, because the Titanic was on automatic pilot and did not need a helmsman and so like the guests on the ship, he was having a good time.

The Ascendant in a mutable house is not helped by the opposing Pluto at  28 Gemini, A man declared bankrupt.  Here we plainly see that a lot of time, dithering about how this could have happened instead of preparing for the worst was squandered.

It has been remarked that most of the Titanic’s lifeboats were unused as many felt that the ship would “be right,” and they would hold steady because the Captain did not present a clear enough picture of the seriousness or urgency of the matter at hand.  With those thoughts, and considering the RMS Carpathia helmed by Captain Arthur Henry Rostron came to the rescue just an hour after the Titanic sunk, time was of the essence.

The two oppositions find their outlet in a T-Square ending at Venus in Aries 04.  The symbol here is Holly and Mistletoe, but Venus is in its detriment & gets the unfortunate meaning of a “complete obsession with superficialities. “

Venus typically is a cohesive force in the zodiac; where ever it is found it tends to like hoard and acquire more of those affairs, but in its detriment, it loses focus and goes into a panic mode tending towards denial, procrastination, and disordered thinking.

In the Titanic chart that detriment was lethal found in the fourth house — end of life issues.  Conjunct the Moon in the third house at 26 Pisces the combination T-Square Venus-Moon conjunction led to panic and large-scale fear.

A Translation of Fire

Mars, the traditional ruler of Aries, plays into this scenario in a translation of light, receiving back from enthusiastic, but disorganized, Jupiter via its conjunction to opportunistic Pluto in the Seventh public house.

It hints here at parlaying and bartering for equipment — life jackets which there were too few and seats on life boats which the crew forgot.  Found in watery Cancer one can see the emotional terror come to a realization as the finality of Death enters the scene.  Panic, frenzy, and disorder run amuck in this locomotive temperament type.