King Albert Edward, the father of the ill-fated Prince Albert Victor, and son of Queen Victoria and Prince Albert, followed his mother to the throne of England under the laws of primogeniture. England is the only country in europe to have that law, and it was recently overturned for the Duke and Duchess of Cambridge first born,, just in case it was a girl; it was not and George stands as of now to inherit the throne after his great granmother, Elizabeth II, her son, the prince of Wales, Charles and then his father, William.

Edward did not have so many intermediaries in between him and his mother, but she refused to leave the throne early because she did not like him or approve of his politics, so he waited 60 odd years — Charles has between that — for Mamma to pass. Finally, in 1901, she did and Edward for a short time, eight years, was King.

The King is a rimmed bowl thanks to the opposition between the Moon in Virgo and Uranus in Pisces. While all bowls are put upon in life, the rim helps them keep their center and not fall to dismay, and bacchanal debauchery, from all the extraneous factors that prey upon them. 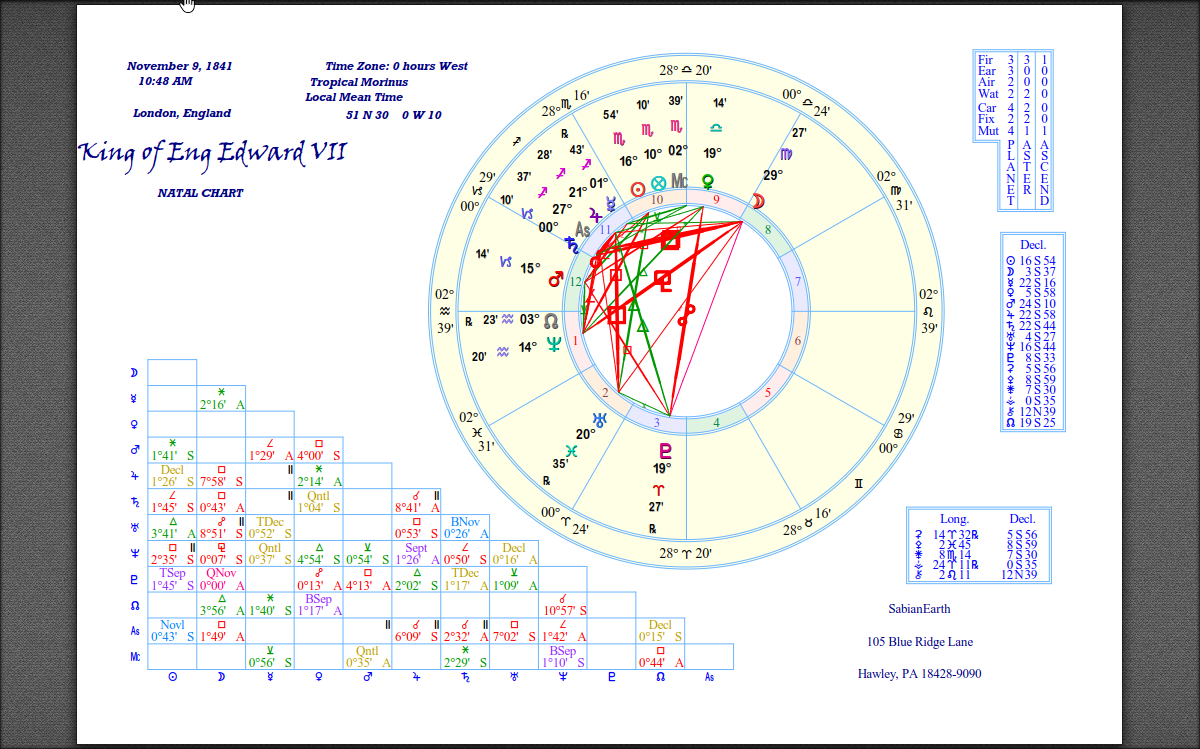 His Ascendant is 28 Sagittarius in the Eleventh house of the public and he has quite a preponderance of planets also therein — Saturn, Jupiter and Mercury.  The conjunction of Jupiter and Saturn give him a Line of Self-Determination that supports his natural disposition, suggesting that he relies more on his his life experiences than either education or philosophies.  Te Moon – Uranus rim reinforces that eccentricity.

His death chart, from Alan Leo’s Astrologer’s Magazine, suggests a heart attack brought on by his excessive & indulgent lifestyle (Uranus square Jupiter opposite the Moon) that became too onerous for his body to support. Upon his death, his son, George V, became King for the next twenty-six years (Pluto in the Fifth House conjunct Mars on the Sixth house cusp at Cancer 04).