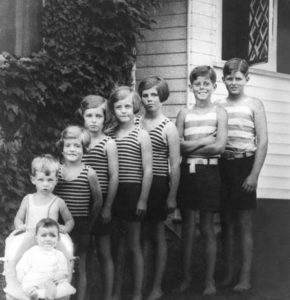 The JFK Presidential Library says that all health and birth data for JFK are closed, that’s probably because of the Commission, but they do have on their site his birth certificate stating he was born at home. Oddly enough, it was not created until 26 years old.  Astro.com gives a 15:00 time based on Jack’s “memory” and is rated an A by Lois Rodden.  It is wild as she gives no one that much leeway in the ratings.

We will use that date and time.  Kennedy gets a 20 degree Libra Ascendant rectifying his location to his exact home address at 83 Beals Street, Brookline, Massachusetts, which is our header image.  When he was ten years old, the Kennedy’s moved to New York City.

He has little fire in his chart,  just Neptune in the Tenth House right next to the Midheaven, suggesting that he was a mystic and dreamer about his role as president for his country.  The low fire may also because he had Schmidt’s syndrome, a very rare combination of Addison’s disease and diabetes. .

Saturn rules the adrenal glands which is square the Libra (ruled by Venus often implicated in the sugar disease) ascendant. His Saturn, while near the tenth house that the planet rules, is actually in the ninth house that is ruled by Jupiter in the seventh. The ringed planet is in its detriment at 29 Cancer 10 (symbol ” A son of the American Revolution” à propos as all presidents are, but here with the meaning of “smug superiority,” perhaps hinting that he was born with a silver spoon — his family was wealthy thanks to Joseph sr. being a bootlegger during Prohibition.

Charubel says that 30 Capricorn is an “arrow in flight” and has an aspiring and ambitious nature impelled by the strength of a force behind him (his father Joseph Sr.)  For the attainment of high or long-term projects.  That fits as becoming President was not a sudden whimsy — it takes long determined planning and wise administration of one’s image.  Charubel states that “heredity and training count for more than what is usual in this case by ultimately it is a degree of “decline.“

In the meantime, President Trump is supposed to be releasing the Kennedy papers. The UK Independent differs from Roger Stone (see the book cover to the right) on what happened. The Dallas Morning News, thinks that the CIA (where the Bush’s learned their trade) may try for a last ditch injunction against releasing the data.  It seems that the DMN got this one as despite the hoopla it did not happen.

While waiting for the news to break, try to get a hold of Who’s Who In The JFK Assassination: An A to Z Encyclopedia and learn who are the characters. Or peruse the Mary Ferrell Foundation site and draw some of your own conclusions.  The papers, btw, are supposed to be released on Mrs. Ferrell’s birthday. That too did not happen. And finally there is Six Minutes in Dallas by Josiah Thompson that gives a mind numbing account of the assassination as he proves that Oswald could not be a lone gunmen.