Barack Hussein Obama’s 1st inauguration on January 20, 2009, at 12 noon had the Ascendant of  13Taurus 56.  Sepharial wrote about 15o years ago about this Symbol that it denotes a “humble and conscientious nature that find pleasure in good works. …. The chief characteristic is the sense of justice and fraternity and shows a degree of Liberality.”

Marc Edmund Jones on the same symbol is “Shellfish groping and children playing,” and shows an emphasis on self-discovery as the dominant mold of reality.  The keyword here is Emergence.

Honestly, we think that both Liberality and Emergence work well for the 44th President as  Chiron in the 10th House of Status and Presidential works suggests the importance of his personal mandate for Personal Responsibility.

Highlighting Chiron is a conjunction to Neptune, the planet of duty,  indicating that he felt strongly about his promises to the LBGT and minorities communities but with a Saturn, in Virgo 22 opposite Chiron he ran out of “time.”    Still that Saturn looms large on the chart.

It fits right into the T-Square ending with the Moon 29.44 Scorpio suggesting a tough, feminine partner — encouraging him not to give up.  The Sabian symbol is a Halloween jester that has the gift of making the “desires and ambitions of not only himself but others materialize. “

The Moon gets extra power from sextiling to Mars in Capricorn at 18.29 (A hen scratching the earth for her chicks)   giving him the incentive to push it to his second term & the audacity of hope that he would be reelected. 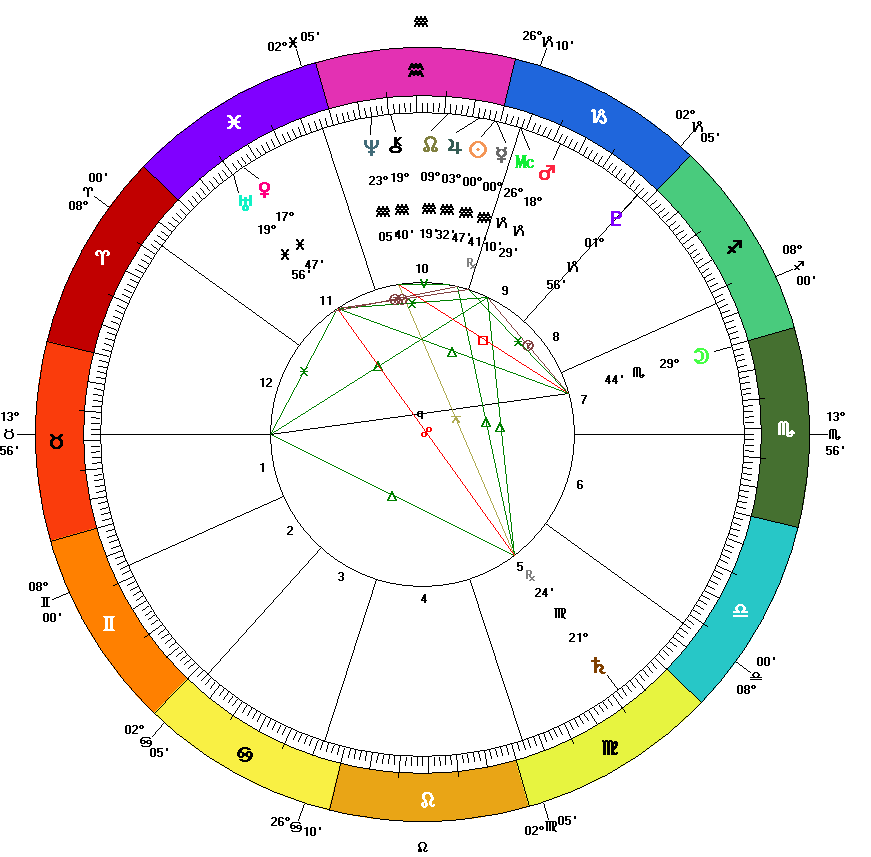 Despite a lackluster first term, Obama did little but continue his predecessor’s initiatives, Charubel tells us that was because he had a lot to set up and get ready which makes sense as was imprinting the judiciary with his philosophy (9th house  —  Pluto 02 Capricorn).

The Welsh seer  writes encouragingly that the ” the forest is thick” but a strong man with a lantern, “can spot the sunrise,” about Diogenes of Sinopia, Greece.  He continues that a “new man, a new philosophy, a new aeon…is on the brink.”

Who is DIOGENES that Charubel should allude to him?  He is Diogenes ” the Cynic,” a Greek philosopher  born at Sinope about 412 B.C.,   He died in 323 at Corinth & according to Diogenes Laertius,  on the same day which Alexander the Great died in Babylon.

His father, Icesias, a money-changer, wasr exiled or perhaps imprisoned for adulterating the coinage. Diogenes was included in the charge, and went to Athens with one attendant, whom he dismissed, saying,    If Manes can live without Diogenes, why not Diogenes without Manes?  {Manes is his personal slave}

It was in jail that made him attracted to the ascetic teaching of Antisthenes.  After his release Diogenes became his pupil &  rapidly excelled his master both in reputation and austerity of his life.  The stories  told  are probably true &  illustrate the logical consistency of his character. He inured himself to the vicissitudes of weather by living in a tub belonging to the temple of Kybele (English Cybele), the primal nature goddess of Thrace.

The single wooden bowl he possessed, he destroyed on seeing a peasant boy drink from the hollow of his hands. On a voyage to Aegina, he was captured by pirates and sold as a slave in Crete to a Corinthian named Xeniades.  Asked his trade, he replied knew none, but that of governing men and that he wished to be sold to a man who needed a master.

As tutor to the two sons of Xeniades, he lived in Corinth for the rest of his life, which he devoted entirely to preaching the doctrines of virtuous self-control. At the Isthmian games, he lectured to large audiences who turned to him from Antisthenes. It was, probably, at one of these festivals that he craved from Alexander the single boon that he would not stand between him and the sun, to which Alexander replied: “If I were not Alexander, I would be Diogenes.”

On his death, about which there exist several accounts, the Corinthians erected to his memory a pillar on which there rested a dog of Parian marble; he is considered a Cynic.

Virtue, for him, consisted in the avoidance of all physical pleasure; pain and hunger both were  helpful in the pursuit of goodness; and the artificial growths of society appeared to him incompatible with Truth and goodness; that moralization imply a return to nature and simplicity. He has been credited with going to extremes of impropriety in pursuance of these ideas; probably, however, his reputation has suffered from the  immorality of some of His successors.

Both in ancient and in modern times, his personality has appealed strongly to sculptors and to painters and Classical busts exist in the museums of the Vatican, the Louvre, and the Capitol. The chief ancient authority for his life is Diogenes Laertius.